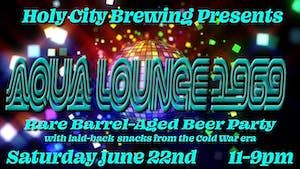 We’re counting down our days on Dorchester Road, before we move our taproom over to our new Park Circle facility, and it’s getting pretty close. It’s going to happen by the end of 2019, and we want to use the original taproom to throw some cool, themed parties each month so that we can send the old spot off with a bang. We’re starting off on June 22nd, for the first installment of these monthly shindigs. Welcome to AquaLounge, 1969.

For those of you who have been to any of our anniversary parties, you know that we’ve got a five-tap system over on the production side of the brewery that we lovingly refer to as The AquaLounge. It’s a place that we tap beers that we’ve aged for a long time, or that we’ve saved from legendary batches of the past. It’s always been the tiny, hidden side-bar in the brewery, and when it’s open, you can rest assured, there’s something on tap in there that we’ve been working hard on or that we’ve been hiding away for a special occasion.

We’re opening up the AquaLounge for a special barrel-aged beer showcase, so in addition to the twenty-five taps in the taproom, we’ll have five special, limited release beers just one room over. We’ll make it easy on you, too. The tab you start at the main bar transfers to the AquaLounge and vice versa. Sip on some delicious brews at the AquaLounge, then head back over to the picnic tables and listen to some live music. We’ve got a lot of beer sitting in those barrels right now, and we’re still picking out which ones would be perfect to showcase to you, the general public, so we’ll announce the beer list the week before the event.

The fine folks at The Holy City Kitchen are developing a special appetizer menu in addition to our regular kitchen fare, inspired by the culinary trends of the 60s and 70s. Think jello, deviled eggs, tuna casserole and the like. We’re going to put a twist on these classic recipes, because it wouldn’t come out of the Holy City Kitchen if we didn’t. We’re continuing to throw ideas around, but we will post the menu the week before the event, just like the beer list. We’re also going to let everyone know which band we’re booking for the event, so that you can look forward to the soundtrack for this special day at the brewery. All this info will be doled out in due time! We promise!

We’re excited to start this event series because we think it’s going to taste great and be a lot of fun. It’s been a blast spending the last eight years at our old taproom, and there are a ton of memories that we’ve made in there that are irreplaceable. We’d like to take this opportunity to thank everyone that’s eaten at our place, or drank a pint over that time, and we’d like to invite you to AquaLounge 1969, all day long on Saturday, June 22nd. Cheers!