Herron Entertainment has been producing the best shows at clubs and theaters across the country and is now bringing those same great shows to the breweries across America. Featuring comedians in an environment they truly can feel at home in.

Herron Entertainment continues to lead the way in comedy with its cross country brewery tour. Featuring some of the best NYC and LA based comedians without NYC/LA prices because we know your money is important to you and only want you to enjoy a nice night out – without having to take out a loan.

ON TAP (pun intended) for Herron Entertainment, LLC is “The BREWERY COMEDY TOUR” and it’s picking up much steam as it heads into 2018 promising to hit 300 breweries all across the U.S.A.

JAMES MYERS
Originally from Ohio, JAMES MYERS began his comedy career in 2012 at the flagship Funny Bone Comedy Club in Columbus where he was a three-time finalist in the club’s Funniest Comic contest. Bookers noticed and MYERS began MC work at Funny Bones all over the midwest . Since moving to New York City a little over two years ago, MYERS has already earned a reputation for himself in the highly competitive East Coast comedy scene. MYERS quickly became a regular at New York Comedy Club , Dangerfield’s Comedy Club , EastVille Comedy Club, the hot spot in the village, The Lantern as well as the nationwide chain of Funny Bone/Improv Comedy Clubs , and won the 2015 Hoboken Comedy Festival, beating out 45 contestants and over 300 applicants. You can also see JAMES MYERS on the Huffington Post, where he’s joined their panel for the live stream of the debate for their election coverage: If you haven’t seen JAMES MYERS at your local comedy club, you’ve most certainly seen one of his jokes online. As one of the most upvoted comedians on Reddit, his StandUpShots have garnered over 30 million views on the website alone and millions more as they have been shared by respected comedy websites like College Humor , The Chive , and eBaum’s World as well as popular Facebook pages like The Tasteless Gentleman, George Takai, and Cheezburger.

CHRIS HARVEY
Chris is a stand up comedian and actor, he started his comedic journey in 2014 at his now home club The Funny Stop in Cuyahoga Falls Ohio. Chris comedic style has been compared to a mixture of Lavell Crawford and Gary Owen, as he uses self deprecation to tell stories of his past relationships and life memories. His loud projection and act outs allow him to control a crowd to where in intimate rooms he doesn’t even use a microphone. In his career he has accomplished many things at the young age of 24, in 2014 he won Ohio`s funniest amateur and in 2016 he won a contest for Toledo funniest urban comic. He performe
d in the 2017 Cleveland Comedy Festival, and is a regular at many comedy club such as Funny Bone in Liberty,Toledo, and Dayton Ohio, Big Tommy`s, and the Funny Stop Comedy Club. His acting career started when he appeared in a infomercial that was aired on FOX, he also played a character known as “Snuffalouphugus” in the 2018 movie Hey Mr Postman starring Omar Gooding and Rodney Perry. Chris’ journey continues as he travels to perform standup in breweries, wineries, colleges and clubs.

Visit https://www.universe.com/events/7BDK5H?embed=open&ref=universe_facebook_push&eventref=fb_oea for more information and to get tickets 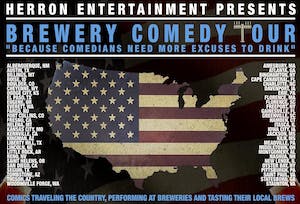