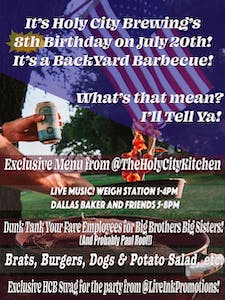 We are counting down the days until we move to our new production facility, and it’s starting to get more apparent to us that we’re leaving the taproom that brought us to where we are today. We’re going to miss our old warehouse, and we want to make sure we send it off right!

We’re going to throw a “BackYard Barbecue” for our 8th Anniversary Party on July 20th. What’s that mean? I’ll tell ya.

We have @theholycitykitchen cooking brats, burgers, hotdogs, potato salad, and all the fixin’s of a typical barbecue. The usual BBQ suspects, really. We’re doing an exclusive grill-out menu for the shindig, and if you’re wondering, we’ll have vegan and vegetarian options, too.

Some of our favorite HCB musical staples are going to be there, too! We’ve got Weigh Station playing from 1-4pm, and Dallas Baker and Friends from 5-8pm. Rain or shine, we’ll have these dudes jamming out all day.

As per usual for the birthday party, we’ll have a dunk tank for charity. All the proceeds go to Big Brothers Big Sisters, and you’ll get to dunk the staff, probably Paul Roof, and I’m sure there will be others who will get dunked.

LiveInk Promotions will be there printing shirts on demand. It’s a crazy cool event swag company, and they’ll have exclusive designs for the party that you can get printed on any type of shirt you want. The coolest part about these shirts is that they’re only available day-of! Show them off to your friends who didn’t get off the couch to go to the party for the rest of eternity!

We’ll have 30 beers on tap. No regular menu. As per usual, service animals only. Thanks to everyone who’s ever drank a beer of ours for taking us on this wild journey to where we are now! Come out and celebrate with us. Cheers.